One of my former bosses used to say that perception is reality. At the time, I didn’t fully agree, but the more I thought about it, the more I recognized the fundamental truth in that saying. It goes along with the saying “Whether you think you can or whether you think you can’t, you’re right” (Henry Ford). I have to keep telling myself this, but it goes beyond personal plans and self-determination. I took it a step further and realized that it definitely applies to politics.

Without getting too overtly political, all I can say is that whomever controls the narrative controls the perception of reality. This is why fake news and outright media bias is so dangerous. Does it happen on both sides? Yes, of course. I’ll leave it up to my smart readers to determine where the truth actually lies. The more I thought about it, the more I realized that this gets to the heart of my political beliefs. It gets to why I believe what I believe. This is also why it is so difficult to change another’s political opinions.

More than anything, I am truly tired of people telling others what they should believe. Excuse me, am I not capable of making my own well-supported decisions? It doesn’t matter if it is politics or something else, I will not blindly follow anyone or anything. Will people try to persuade one another? Sure. No problem. I am always willing to listen to a well thought-out opinion. That is not what I am discussing here. I am talking about the arguments used by many that state if you are x, y, and/or z (for example, a woman, college educated, etc.), you must believe 1, 2, and/or 3 and lockstep with this politician or political party. It happens. It happens every single day.

This entire idea can be taken one step further. It explains some detrimental beliefs we have in our society. The one I want to talk about here is the belief that everyone needs a college education. While I don’t necessarily believe that college is for everyone, I do believe that everyone needs some kind of additional training or education after high school. Unfortunately, we as a society place a much higher value on a four year college degree than we do trade school experiences. The sad thing is that we need people to become electricians, plumbers, builders, and so much more. There are many people out there who much rather work with their hands than do straight academics. Unfortunately, many of those students are talked into four year degrees when they might be much happier learning a trade. In the end, our society loses. We have gutted the trades, and those who pursued a traditional four year degree instead are left with a mountain of unnecessary debt. By the way, there are so many other examples.  This just happened to be the least controversial example I could think of at the moment.

I suppose my biggest frustration is that so many people do not base their perceptions on the truth. The truth doesn’t seem to matter much anymore. This sad fact is precisely why we are not resolving any of our political, economic, or social issues. No one wants to listen to anyone else. 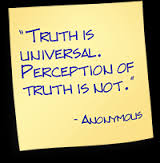